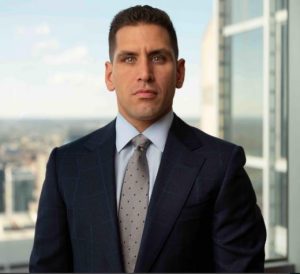 A Philadelphia native, Terrance DeAngelo attended undergrad at LaSalle University, where he rowed and wrestled. In 2008, Terrance received a bachelor’s degree in nursing from LaSalle, with honors. Following graduation, Terrance was enrolled in Officer Training School in the Air Force, eventually rising to become a Captain in the Air Force Nurse Corp. There he worked clinically at Andrews Air Force Base in Washington DC. Terrance volunteered to deploy in support of Operation Enduring Freedom, which took him to Southeast Afghanistan, where he was attached to a Joint Special Forces Team. After serving for several years, Terrance was honorably discharged in order to pursue his legal education at Temple University’s Beasley School of Law. In 2015, Terrance joined his brother, Joseph DeAngelo, at Saltz Mongeluzzi Barrett & Bendesky, PC, where he was promoted to Attorney following his completion of law school. Terrance DeAngelo has been with Barrett DeAngelo since its inception. Terrance concentrates in Medical Malpractice and Nursing Negligence matters.

When he is not working, Terry enjoys spending time with family, mountain biking, going to the gym, and working with his hands.

Back to About the Firm

Personalized counsel from people who care.